GAPS is guided by the following definition from StopBullying.Gov, a federal government website managed by the U.S. Department of Health and Human Services: 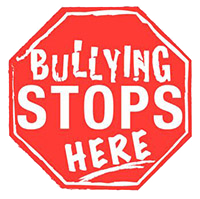 Bullying is unwanted, aggressive behavior among school aged children that involves a real or perceived power imbalance. The behavior is repeated, or has the potential to be repeated, over time.

In order to be considered bullying, the behavior must be aggressive and include:

Bullying includes actions such as making threats, spreading rumors, attacking someone physically or verbally, and excluding someone from a group on purpose.

There are three types of bullying:

Cyberbullying is the use of modern communication technologies, such as but not limited to e-mail, instant messaging, chat rooms, websites, social media/networks, text messaging used to intentionally embarrass, humiliate, threaten or intimidate an individual or group in an attempt to gain power and control.